How fun is this pillow? 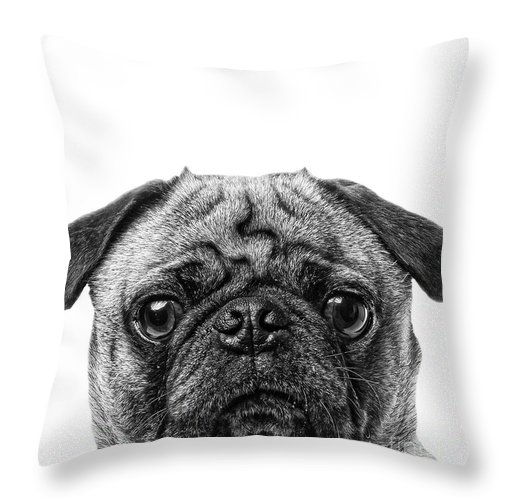 A cute black and white pug pillow available in a variety of sizes starting at $25.

New Pug throw pillow by fine art photographer Edward M. Fielding. Our throw pillows are made from 100% polyester fabric and add a stylish statement to any room.   Pillows are available in sizes from 14″ x 14″ up to 26″ x 26″.   Each pillow is printed on both sides (same image) and includes a concealed zipper and removable insert (if selected) for easy cleaning.

According to BuzzFeed: Pugs are majestic little lumps that emit rays of happiness and sunshine.

But its not all about painting the town red, pugs are comical, funny and lovable!

Who can resist those eyes?  Miss You by Edward M. Fielding.  Available as prints here.

Sometimes playful and clownish, sometimes calm and dignified, always sturdy and stable, good-humored and amiable — this is the Pug.

Though peaceful with all the world, the Pug will sound off with his rather odd bark when visitors arrive. Then he will welcome them inside with snorts, snuffles, and grunts.

As is the case with most short-faced dogs, his large expressive eyes, wrinkled forehead, cocked head, innocent expression, and strange sounds bring out parental feelings in many people.

A Pug is very childlike and always needs to be with you.

Unlike the more energetic members of their species, pugs sleep an average of 14 hours a day, and any pug owner can tell you it can be quite a feat to get a comfy pug off the couch.

A friend of mine called to request a special photo shoot for their latest family member – Eva.

Eva is a Chinese crested dog is a hairless breed of dog. Like most hairless dog breeds, the Chinese crested comes in two varieties, with and without fur, which are born in the same litter: the Powder Puff and the Hairless.  This is one of the dogs the often show up in those ugliest dog in the world contests.  But not this cute little sweetie!

Eva – rescued from a mobile home where a pit bull terrorized her. Now in a loving home.

This cute little dog was a pleasure to photograph with those great ears and nearly hairless body but the poor nervous thing just wouldn’t settle down. Caressed in her new mother’s arms, she finally felt safe and sound.
…
When this dog was rescued after living in constant fear of the pit bull who also shared their cramped quarters in the mobile home, she was nearly hairless. Her hair is now starting to grow back in.
….

….
Fine art pet photography by Edward M. Fielding – www.edwardfielding.com
….
Profits from the sale of “Rescue” will be donated to the local animal shelter who rescued Eva and countless other unwanted pets in the Upper Valley region.

Edward M. Fielding was recently one of the featured artists in the PhotoReel art show at Gallery W at the Whitney in the Berkshires.

In addition to fine art photography, he enjoys being a staff educator at the AVA Gallery and Arts Center in Lebanon, NH teaching creative technology such as Scratch and Lego Mindstorms robotics to elementary and middle school children. 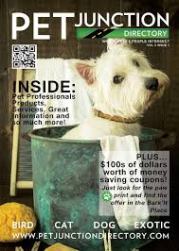 Local artist Edward M. Fielding never really considered himself a dog person.  Growing up his family had a series of dogs, a pointer, a boxer and a golden retriever, but he never really felt a strong bond to them –  a lot having to due with his allergies.

It wasn’t until his wife and son convinced him that it was time to have a dog.  Knowing full well that that as the one working from home, he’d be the one most responsible for the care-taking, he agreed to let the little white, hypoallergenic rescue dog into their lives.

Tiki the West Highlands White Terrier made his journey from a backwoods illegal puppy mill in Tennessee in a van full of scared and barking dogs to the Petsmart in Manchester and then into the arms of the Fielding family where he became the newest addition to the family.

At the time Fielding was honing his craft by producing work for the stock photography market which required a large volume of work and thus a large variety of subjects.  Tiki being the only model available during the day became a natural partner in the creation of a series photographs that grew into the publication of a book “the Quotable Westie” and some of the most popular images on Fine Art America the online art store. 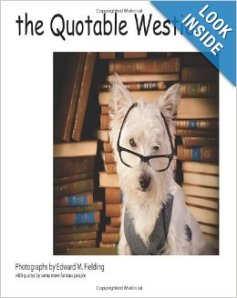 Humorous images of a cute westie and quotes from famous people.

Tiki has modeled in a variety of photographs ranging from Aladdin to appearing inside a Halloween Jack O’ Lantern.  Often the images are inspired by trips to the local Listen stores where Fielding buys bags full of toddler clothes.  These are often cut and pinned to the canine figure.

Recently Tiki’s fame as a model has increased as he landed his first magazine cover for Pet Junction Magazine distributed throughout Florida.

The question that comes up most when people see the series of photographs is how do you get him to sit there like that?

Fielding explains, “I started working with Tiki when he was a puppy.  It was like any training, treats were involved so eventually Tiki has come to believe that flashing studio lights mean that a treat is coming soon.  Anytime I set up the studio, he’ll be around even if I’m just setting up a still life or something.  He is such a good model that I’ve put him in a scene and then forgotten something like a memory card in another room.  I’ll leave the room, come back a few minutes later and he’ll still be there waiting patiently.”

“Of course shooting with split second flashes helps also.  Especially when working with other dog models who are not as calm in the studio environment.  I also have a few tricks up my sleeve, a bit of bacon grease on the muzzle if I need a tongue shot or hiding a treat somewhere.  One of my most popular images is Tiki pretending to be a photographer looking into a vintage 4×5 press camera.   What the viewer doesn’t know is that there is a doggie treat sitting there in the viewfinder and Tiki has his nose pressed up smelling it.” 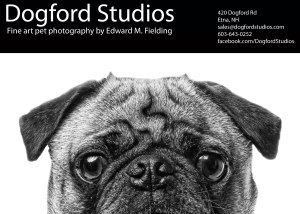 Fielding works out of his home which he has dubbed “Dogford Studios” and sells his work through various stock agencies for commercial usage and to the public via his website www.edwardfielding.com as well as doing private studio sessions. 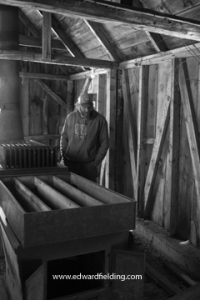 Besides canine photography Fielding works with a variety of subjects including mysterious images for the book cover market through Arc Angel Images and is working on an ongoing series looking at traditional maple sugar production in the region.  Four images from the maple sugar series will be shown at Gallery W at the Whitney Museum in Pittsfield, MA this March.

Fielding also teaches a popular series of Lego Robotics classes for children at the AVA Gallery in Lebanon, NH.

Links for this article: