Peony Still Life with Old Suitcase. A floral still life with old canning jar, white peony flowers and a vintage suitcase. Fine art photography by Edward M. Fielding – www.edwardfielding.com
….
This fine art photograph of beautiful white antique peony flowers in an old vintage canning jar on top of an old leather suitcase is available for Rights Managed Licensing for your next book cover or magazine editorial project via Arc Angel Images at – http://www.arcangel.com/search/preview/a-floral-still-life-with-old-canning-jar-white/0_00392964.html
…..
This image is a still life featuring an old vintage leather suitcase, fresh picked white peony flowers and an old Bell canning jar with beautiful soft side lighting like you might see in an old masters painting against a dark background.
…..
Available for Rights Managed Licensing via Arc Angel images #00392964
……
Peony flowers are my all time favorite flowers to work with, they evoke such a classic look, to me they say Victorian age. Something about their full petals. We have several peonies planted on our property and recently moved and divided several plants. They are some of the longest lasting flowering shrubs or plants that you can purchase but they don’t like to be moved or divided so we might have to wait a couple of years before these ones come back to their full splendor. A couple years ago we visited a peony farm in Vermont where the owner admitted to a full on peony passion and the inability to control himself when it came to purchasing new and rare varieties. One plant on his farm cost him something like $4,000. While many of his offerings were common and sold for $20 to $50 some of the higher prices plants fetched upwards to $400 per cutting. Peonies – its a passion!

Sunflower photos for sale. Choose your favorite sunflower photos from thousands of available photos. All photos ship within 48 hours and include a 30-day money back satisfaction guarantee.

Helianthus L. /ˌhiːliˈænθəs/[2] (sunflower) is a genus of plants comprising about 52 species[3] in the Asteraceae family, all of which are native to North America. The common name “sunflower” also applies to the popular annual species Helianthus annuus. This and other species, notably Jerusalem artichoke (H. tuberosus), are cultivated in temperate regions as food crops and ornamental plants.

The genus is one of many in the Asteraceae that are known as sunflowers. It is distinguished technically by the fact that the ray flowers, when present, are sterile, and by the presence on the disk flowers of a pappus that is of two awn-like scales that are cauducous (that is, easily detached and falling at maturity). Some species also have additional shorter scales in the pappus, and there is one species that lacks a pap-pus entirely. Another technical feature that distinguishes the genus more reliably, but requires a microscope to see, is the presence of a prominent, multi-cellular appendage at the apex of the style.

There is quite a bit of variability among the perennial species that make up the bulk of the species in the genus. Some have most or all of the large leaves in a rosette at the base of the plant and produce a flowering stem that has leaves that are reduced in size. Most of the perennials have disk flowers that are entirely yellow, but a few have disk flowers with reddish lobes. One species, H. radula, lacks ray flowers altogether.

The domesticated sunflower, Helianthus annuus, is the most familiar species. Perennial sunflower species are not as popular for gardens due to their tendency to spread rapidly and become invasive. Whorled sunflowers, Helianthus verticillatus, were listed as an endangered species in 2014 when the U.S. Fish and Wildlife Service issued a final rule protecting it under the Endangered Species Act. The primary threats are industrial forestry and pine plantations in Alabama, Georgia, and Tennessee. They grow to six feet tall and are primarily found in woodlands, adjacent to creeks and moist, prairie-like areas. 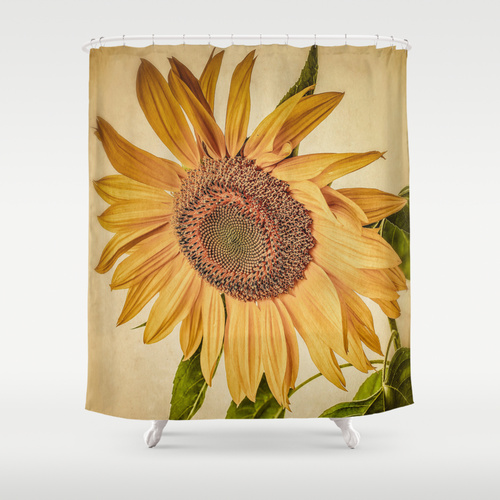 Customize your bathroom decor with unique shower curtains designed by artist Edward M. Fielding. Made from 100% polyester our designer shower curtains are printed in the USA and feature a 12 button-hole top for simple hanging. The easy care material allows for machine wash and dry maintenance. Curtain rod, shower curtain liner and hooks not included. Dimensions are 71in. by 74in.