I live in the New Hampshire country side. On one side of our property I could hook a golf ball through a window of my neighbors house, but in the other three points of the compass on our 4.5 acres we are surrounded by wetland, a horse pasture, a patch of forest and a farm.

Landscaping or simply beating back the wilds with scythe, weed trimmer, chainsaw and loppers is a rather constant activity around here. Its good old fashioned exercise with a side benefit of providing fuel for the wood stove and sunlight for the garden.

Yard work never fails to provide photographing opportunities in surprising ways. I don’t know if its the mind numbing hum of the weed trimmer (I have this nice quiet battery powered one that includes a built in timer called battery life that keeps one from over working themselves – Black & Decker LST136W 40V Max Lithium String Trimmer

) or its just nature interrupting but I always seem to find a good excuse to stop the yard work a grab the camera for a couple of shots.

One time it was this strange and wonderful mushroom:

The next time it was a huge black toad that found its way to the bottom of the newly delivered wood pile:

Or the little guy who hopped around just under the whirling string of the trimmer. Sorry about the haircut little fella!

Today’s find was an old soda bottle that started poking up out of the ground. Unfortunately it was just the bottom half because it was rather interesting. I washed it off but the water and soap started to peel off the paint. Here is what was left:

The front label has a picture of a hillbilly firing a rifle at some kind of animal up the hill near an outhouse while a startled pig looks out at the viewer.  It has the words “Made from flavors specially blended in the traditional hillbilly style”  what ever that is.  On the back there is the slogan “It’ll tickle yore innards!” and has an arm raising a glass.

I love it!  The typeface alone is so awesome.  Wish I had the whole bottle.  I did some Google research and found out that low and behold, this was an early bottle for “Mountain Dew” and most likely from the 1960s.

Early Mountain Dew bottles with the Hartman name on them are very scarce. The first bottles were clear, not green glass. A 7 oz. clear glass bottle sells for $100 and a 7 oz. green glass bottle is valued at $75

The bottle dates from the 1960s and are Pepsi-Cola products. Like Coca-Cola, Pepsi-Cola licenses local bottlers to produce their brand name soda. Each franchise used the name of a different hillbilly couple to identify soda bottled at their plant. The extact number of participating plants is unknown. Bottles are collected by plant. A green 7 oz. bottle has a value in the $12 to $15 range, a green 10 oz. bottle in the $8 to $10 range.

Back in the day, the concepts of “landfill”, “waste transfer station” and “recycling center” were foreign concepts. Most of the trash was paper, cardboard, metal or glass. Not like all of the plastic that we have now. People out in the country typically had enough land that they could parcel off as their own little junkyard. That’s where the empties went along with the old car. Taking the car for a Sunday drive out in the country might have included tossing the bottle of pop out the window. Why not? There was so much country to go around. Times change. But I bet this is not the last little time capsule from the past I see pop up out of the ground.

Nothing wrong with getting an early start on the Christmas season! December gets so busy few people have the time to enjoy the holiday. Just last year my siblings never even got around to send out cards.

I just sold two boxes of these Christmas cards to someone who is looking to get ready for the season. Planning ahead certainly will take a lot of stress out of the upcoming season. And why not spread the expenses around. Buy some cards and gifts early so you don’t have that big credit card bill in January. This way it will only be the food and drink from the parties and that fresh cut Christmas tree that you’ll have to worry about. Or maybe send off your cards in August and skip town on a long extended vacation!

Of course Christmas Baubles are fine – colorful, modern but if humorous Christmas cards are more your style they you can’t go wrong with some of these funny Christmas dog cards by Edward M. Fielding and available through Fine Art America:

Nothing says hip and modern like fine art photography.  Ever notice what TV and movie set designers tend to pick to hang on the walls of the characters houses, offices and apartments?  Watch closely next time you watch your favorite TV show, it almost always fine art, black and white photography.  Why?  In my opinion its because the black and white doesn’t compete with the other colors on the set and because photography is considered a modern and contemporary art form.

Now the problem with most art buyers is that they tend to buy artwork that is too small.  This leads to hanging several undersized artworks for the wall and the overall effect is clutter.   For a look that’s clean and makes a big impact, go large – very large! 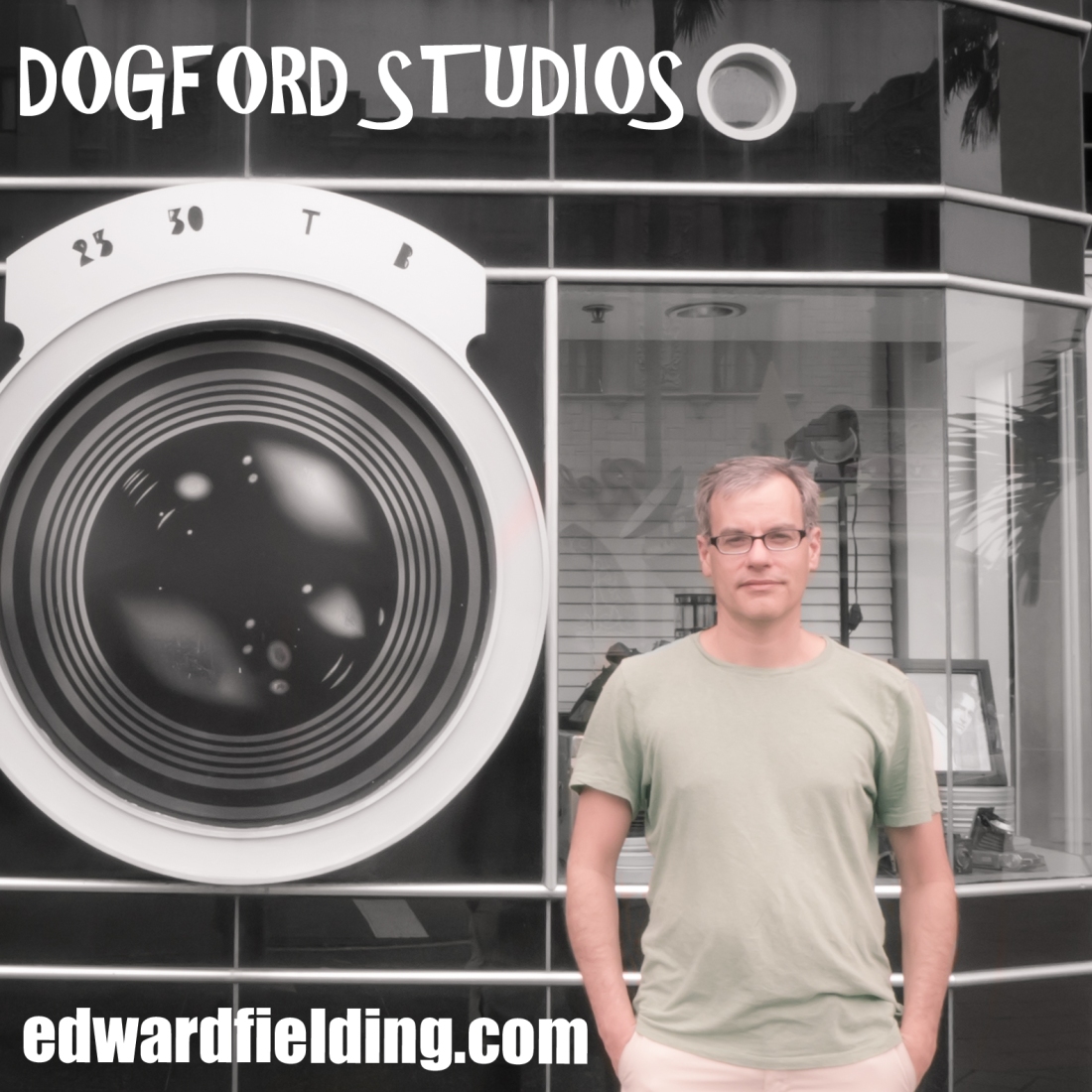 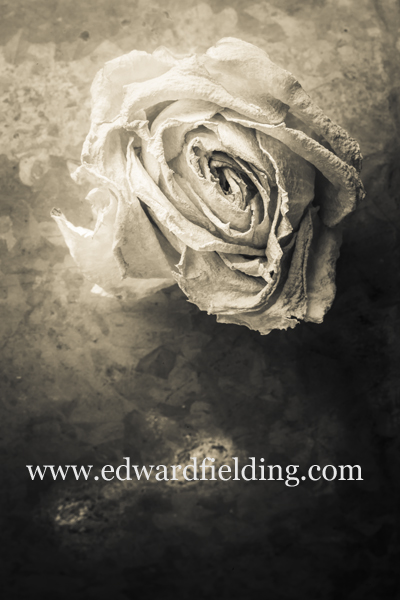 A recent discussion on Fine Art America’s forums and the terrible weather outside has reinvigorated my interest in the fine art photo still life. Still life photography by Edward M. Fielding

“Every day we’re hard at work building a company that provides you with the absolute best possible art buying experience out there. We believe buying original art should be exciting, fun, and incredibly easy. The art we present to you is from hand selected artists and galleries, affordable, and always of the highest quality.”

I’ve partnered with Zatista to bring out a limited edition of select prints. Unlike reproductions found on Fine Art America, these are artist proofs limited to an edition of 75 in a 16×16 inch square format.

What does one do when nature offers up one of its own?

This poor bird broke its neck with a thud against my window. In death this tragic result of not being able to differentiate reflection from reality was sad yet beautiful at the same time. Song birds represent fragility of our natural world. They are often the victims of cats, cars, windows and larger birds. In some countries people actually catch and eat these tiny birds by the dozens in a single sitting.

I saw this death as an opportunity to capture some of the fading beauty. This image available on Saatchi Art takes a single black and white capture of the bird, mirrors it, not unlike the mirror effect that lead to its demise. 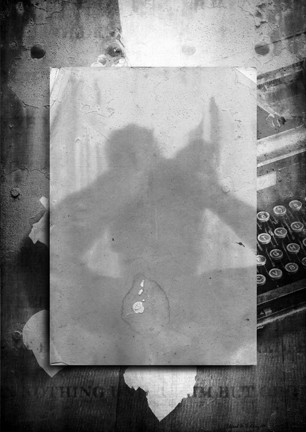 My black and white composite piece “Fiction” is my interpretation of an author suffering from “writer’s block”. Something just isn’t going right for this poor fellow.

Certainly we’ll all had experiences when the creativity doesn’t flow when we want it too. I usually solve mine with a walk of the dog, a hot shower, flipping through magazines or watching a movie. Probably most of my good ideas come from the relaxing hot water in the shower.

When I first got back in to photography after a long absence while raising my young son, I like most people I suppose, was challenged to find subjects to photograph. Flowers, the dog, my immediate surroundings, these were the obvious choices.

I wasn’t until a bit later in my photography journey that I started to see stories and started to create more of a cinematic approach to my work. This just open up endless possibilities to the point where now I rarely have “writer’s block”.

I typically have several ideas for photographs in my mind just waiting for the right prop to come in from Ebay or the right weather conditions, the right time or simply the willing model.

My new Visual Poetry series has opened up new creative possibilities because often the elements needed to create these mufti-layered images have already been shot and are sitting on my hard drive. Its just a matter of remembering, finding and piecing together the elements of the puzzle that becomes the final image.

Striping the layers back on “Roots” part of a series of Visual Poetry by fine art photographer Edward M. Fielding.

To see all of the images in this series, visit the online gallery by clicking on the image above.