Driving around my former hometown of East Haddam, Connecticut (one of many since I was an army brat), I came across a glorious site. Right next to formerly grand home in need of repair, parked along the railroad tracks of the Essex Steam Train and Valley Railroad and right across the street of the old train station now gift shop was this vintage beauty – a pink Ford Edsel.

The Edsel was an automobile marque that was planned, developed, and manufactured by the Ford Motor Company during the 1958, 1959, and 1960 model years. With the Edsel, Ford had expected to make significant inroads into the market share of both General Motors and Chrysler and close the gap between itself and GM in the domestic American automotive market. But contrary to Ford’s internal plans and projections, the Edsel never gained popularity with contemporary American car buyers and sold poorly. The Ford Motor Company lost millions of dollars on the Edsel’s development, manufacturing and marketing. The very word “Edsel” became a popular symbol for failure.

Despite the negative connotations of the Ford Edsel, it really is a beauty of a car. Decked out in all manner of extravagance from the excessive chrome, the elongated lines and distinctive shield like front grill.

I have to thank the owner for parking this beauty for me to discover.  A few days later I returned to the same spot but alas it was gone.  If there is one truism in photography it is to stop and take the shot when you see it.  Don’t expect your subject to be there the next month, next day or even the next hours.

I’ve had countless experiences where I’ve returned to a spot to find my subject moved, demolished or otherwise just gone.

A beautiful red classic vintage car parked on top of a sand dune with a path leading down to the ocean. Follow your dreams by Edward M. Fielding – http://www.edwardfielding.com
…

Because no one is going to follow them for you. 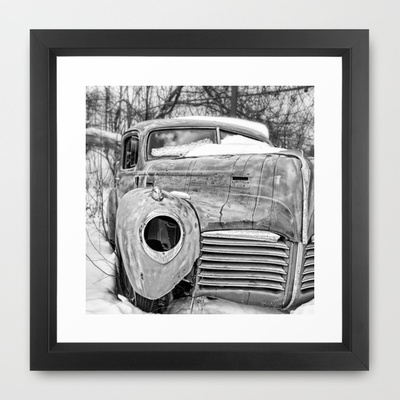 Old Hudson in the Snow by Edward M. Fielding

Old Hudson in the Snow

As shown in Vector frame from Society6.  Link here.

The Vector frame is made from solid wood with a contemporary, angular profile measuring 0.87″ wide x 0.87″ deep. A gesso coating gives the molding rich color and a smooth finish. Premium shatterproof acrylic protects the art print, while an acid free dust cover on the back provides a custom finish. Includes wall hanging hardware.

A 16×16 print is currently on display at the AVA Gallery in Lebanon, NH.

An abandoned old Hudson sedan in the snow. Black and white fine art photography by Edward M. Fielding
…..
The Hudson Motor Car Company made Hudson and other brand automobiles in Detroit, Michigan, from 1909 to 1954. In 1954, Hudson merged with Nash-Kelvinator Corporation to form American Motors. The Hudson name was continued through the 1957 model year, after which it was dropped.

Last year, a friend of mine showed me photos of a local car show in his hometown and I was blown away by the number of vintage cars attracted to main street Marlborough, MA. Located just inside the 495 belt around Boston, sleepy Marlborough isn’t known for much other than being a bedroom community for Boston and the technology companies that ring this major metropolitan area. But the annual spring car show on the historic main street puts Marlborough on the map among car fanatics.

The United Brethren Masonic Lodge was chartered 1859 in Marlborough, Massachusetts. To celebrate their 150th Anniversary in 2009, the Lodge decided to host a car show and worked with the City of Marlboro as well as the Push Rods of Waltham. The event was so well received that it has since become an annual tradition and continues to grow in popularity. None of this would be possible without the support from the City of Marlborough and the business community that sponsors the event making it free to the general public. This is a non-profit event whereby each year all proceeds are donated to a chosen charity.

And the show keeps growing every year. The recent show coincided with a gorgeous summer-like day with bright sun and a cloudless sky, which brought over 300 cars to the downtown. Starting at 9 am, they parked up and down the main street and even filled in side lots. And they kept coming through out the day. We started down one side of the street and had to keep stopping to take photos of the newly arrived cars. It must have taken two hours to see all the cars – heavy on the muscle cars and American makes – Mustangs, Roadrunners, GTOs, Cameros, Cobras but there were all sorts of cars from the 30s, 40s, 50s and 60s including a few Europeans like Porsche, VW, and even a 1930 Bugatti open cab race car. The Batmobile was there as well dune buggies (3!), VW Campers, drag racers and heavily modified hot rods as well as a few Factory Five AC Cobra kit cars.

According to the press kit, this is one of the first car shows of the season so a lot of car owners who have garaged their car all winter, can’t wait to show them off at this annual event.

Click through to check out my gallery of over 100 classic vintage cars.