If you’ve been looking for a Halloween card at Target this scare season, chances are you’ve spotted the “Halloween’s Here! Hope your celebration’s terrier-ific!” card featuring a West Highlands White Terrier in a clown costume on the front. 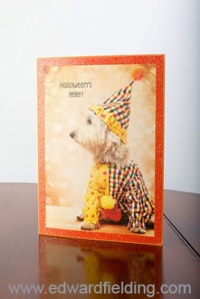 That’s my “Tiki” the wonderful westie super dog model.  Tiki has been modeling for me since he was a little pup and loves posing with studio lights.  He has come to know the pop, pop of the flash as “here comes a doggie biscuit”.

Tiki has starred in several well know images such as “Pho Dog Grapher”:

And the very popular “Wash Day” which as appeared on the cover of a regional pet magazine in Florida.

A collection of the best of Tiki and photographer Edward M. Fielding’s collaborations have been compiled in the book “The Quotable Westie” which is available on Amazon.com at – http://www.amazon.com/Quotable-Westie-Photographs-Edward-Fielding/dp/1481084372

What’s the secret to getting your dog to pose for you?  Early training is the key as well as treats, repetition and lots of patience.  One method uses a clicker.  When the dog does what you want, click the clicker.  As dog whisperer Cesar says –

There are many different techniques for teaching basic commands like “sit.” Some of the trainers I know and respect use what is called “clicker” training, where they make a “click” sound to acknowledge that the dog has done the behavior desired. And then they give the reward. The dog begins to associate the sound with a treat, and when they do something that gets a “click,” they want to keep doing it over and over again. Think about it as though the clicker is a camera, and you’re “capturing” a wanted behavior.